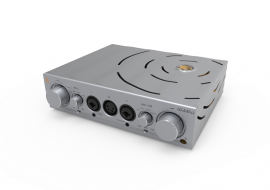 iFi is proud to present its flagship Professional ‘Pro’ series. The first product in the range is the Pro iCAN – a studio-grade headphone amplifier AND audiophile line-stage. Inside beats ‘two hearts’ as there is are two individual Solid-State and Tube amplification sections – selectable on the go. There is nothing quite like the Pro iCAN; literally.

The Pro iCAN will for many, be used as a top-of-the-line, headphone amplifier that drives anything and everything – from CIEMs through to the most difficult to drive headphone ever made, the AKG K-1000.

The Pro iCAN has at the core, a Japan Alps motorised rotary volume potentiometer. This is the ‘6-Track’ version with 4 tracks used for a true balanced volume control. This is the litmus test for any amplifier to see if it is truly balanced, or operates internally in single-ended mode. Those using ‘2-Track’ volume controls may offer balanced in and out, but are not true balanced designs. The Pro iCAN however is fully-balanced from beginning to end.

In terms of flexibility, 3 single-ended and 1 balanced inputs and 1 balanced and 1 single-ended output, the Pro iCAN is a full-function audiophile line-stage that is at home in many expensive hi-fi systems. Its user-selectable Solid-State/Tube amplifiers remain and so are 3D Holographic˚ for Speakers and XBass˚ for ultra-fidelity home audio systems.

At the upper end of the headphone amplifier market, despite the best protestations of ‘balanced’ things are not always what they seem. This is a curious case of ‘Is balance balanced?’

For headphones, it DOES make good design sense to implement a balanced topology (the possibility of higher power, increase dynamic range and lower noise etc.) It goes without saying that the balanced design should be balanced all the way through, ‘end-to-end.’

The following block diagram depicts the balanced input through to the amplifier (orange) which afterwards, reverts to single-ended and runs through many single-ended stages before then going to the balanced outputs.

In detail: The balanced input signal will first be converted into single-ended operation by extra circuitry added to the single-ended signal path. The volume control and actual headphone amplifier are formed by a pure, single-ended circuit.

To provide balanced drive to the headphone, the signal is inverted using more circuitry added to the single-ended audio path.

A sure fire giveaway of such circuitry is the use of a 2-Deck volume control (c.f. 4-Deck for true balanced circuitry), as well as having more than four gain/current buffer blocks among two channels.

At the input, the additional balanced to single-ended conversion circuit generates extra noise on top of the volume control pot.

Hence this is truly a case where MORE IS LESS. There is much more circuitry, but far lesser performance, both objectively and subjectively.

The Pro iCAN however, is true balanced end-to-end, from the input all the way through to the outputs. It operates with full-differential internal signalling, meaning the signal is always remains two separate signals of equal level but opposite polarity. This is what we call True Differential Balanced®.

In detail: The Pro iCAN circuit is fully-balanced with completely equal circuit sections for Positive (Hot) and Negative (Cold) signal phase of each channel. The Volume control has 6-Decks, two decks each control the volume of one channel, and the other two decks are used for monitoring the volume control operation. This exceptional volume control potentiometer is custom made for iFi by ALPS Japan and has no parallel from other makers.

But, as the two halves of the volume control and the two halves of the amplification operate differentially, they effectively become a single stage. So the circuitry is highly elaborate in actual implementation, yet it comes down to the simplest design possible for a headphone amplifier, that is a volume control, a gain stage and a current buffer*.

But in the Hi Fi world, most people view a ‘Balanced Amplifier’ as balanced all the way, from end-to-end, and incorrectly assume even the internal circuits are balanced.

Compared to high-end headphone amplifiers, the tube stage of the Pro iCAN is different in two-ways. First, we don’t use good-quality 6922s or similar. Instead we use the very best; General Electric 5670 which is the premium variant with a different pinout.

Second and just as important is the circuit design. Unlike other headphone amplifiers that have the same circuit and just switch in/out the tube section, the Pro iCAN is the very first of its kind that has two individual input circuits – one tube and one Solid-State. This results in the best sonics of both worlds because the signal path is the shortest and there is no compromise to ‘shoe horn’ the tubes into an already existing solid-state circuit.

For the first time, one can enjoy both the sound of Solid-State and Tubes in a single package (rather than as an ‘Effect Type’ add-on within an otherwise conventional solid-state design) and be able to switch in real-time. For some recordings and headphones/loudspeakers, Solid-State may sound ‘more lively.’. For others, Tube and Tube+ (especially Tube+) will sound more ‘luxurious.’ Select the one that sounds best for that particular moment, be it the recording, the mood or even the weather. After all, enjoying music is an experience to be savoured and not a scientific research exercise.

We haven’t stopped there. We are tube lovers and we appreciate sometimes there is a need for even more tube-like sound, there are two tube settings – Tube and Tube+. The Tube+ position reduces overall loop-gain and thus negative feedback to the minimum. This gives a different trade-off between the tube’s natural harmonics and the transient performance.

The amplifer audio circuit is a development of iFi’s revolutionary ‘TubeState’ design. It is fully discrete, fully-balanced with either tube or J-FET input switchable, bipolar second stage and MOSFET-buffered bipolar class A Power stage (with Class AB for low impedance headphones at very high levels). The resulting circuit may be best described as ‘tri-brid’ where each device is used to greatest sonic advantage while minimising any drawbacks. Furthermore, the circuit is pure DC coupled to avoid using any sonically-degrading coupling capacitors.

3D Holographic® not one but two circuits

There are two 3D Holographic SoundSystems:

For Headphones: (Headphone Outputs)
The 3D Holographic for Headphones is not based on a standard cross-feed system, as found in some High-End headphone amplifiers. Many so called ‘3D systems’ are usually DSP based that artificially effect the sound and add unwanted reverb in order to simulate a ‘spacious‘ type of sound.

It’s true that traditional cross-feed tends to produce an ‘out of head’ sound, but with much diminished spatial components and a narrower soundstage, sometimes almost approaching mono. Most DSP based 3D designs produce an unnatural, echo-like sound, which may initially be impressive, but soon becomes tiring.

By contrast, 3D Holographic for Headphones, provides not only ‘out of head’ placement of the sound sources, but renders the whole sound field in a manner that strongly parallels listening to loudspeakers in a normal room, all achieved without the added reverb. This is the first system in commercial production to achieve this.

As stereophonic recording and reproduction became widespread in the 1950’s, a glaring problem was noticed when replaying such recordings through headphones.

First formally described by Benjamin B. Bauer of CBS and previously Shure Brothers, in his 1960 patent filing for the US Patent # 3088997A as a “gross distortion in space perspective” and later gained the name “in-head localisation”. BB Bauer proposed a correction circuit, quite similar in nature in fact to the EMI Stereosonic Circuit originated by Blumlein, but with a near opposite transfer function.

However, while traditional Bauer crossfeed and its various derivatives do substantially remedy the “in-head localisation” problem, the result is a sound stage that may be best described as “wide mono”, much of the natural spaciousness of recordings are lost.

So Bauer/CBS derived crossfeed is still a rare feature. More often than not gimmicky and sound degrading DSP algorithms are promoted as enhancement to headphone listening that only distort the original recording more, rather correct the fundamental problem.

At iFi we have been building on research that extends as far back as the late 1980’s at the RFZ in Berlin, which suggested that a very different Matrix to the Bauer/CBS one is required and that additional martix coefficients are required to present a natural and spacious soundfield, like that from a speaker based stereophonic playback system.

Starting with this foundation we have applied further research and large scale listening tests to derive a purely analogue matrix, that translates a spacious stereophonic recording with good imaging when replayed on speakers into its equivalent when listening to headphones. That is 3D Holographic Sound for headphones, not crossfeed, not crossfeed plus something, but a fundamentally new way to correcting recordings made for speakers to replay correctly on headphones.

For Loudspeakers: (Line Outputs)
The 3D Holographic for loudspeakers® is an analogue matrix circuit that has two distinct functions:

1. Corrects the fundamental spatial distortion in stereo recordings;
2. Increase the width of the apparent soundstage beyond the width dictated by the loudspeaker placement.

ProiCAN_tu6Correction System
Pro iCAN LOGO-04 Different recordings and different headphones exhibit different frequency responses. XBass is an analogue signal processing (ASP) circuitry and it is sonically superior to Digital Signal Processing (DSP) systems. XBass is tailored to correct the bass deficiency in the headphone/loudspeaker and achieve the desired level. It is NOT a traditional tone or loudness control and provides a minimum of 12dB boost at 10/20/40Hz.

MELF_1 As one can see, the Pro iCAN despits its ‘desktop’ footprint is absolutely chocked full of premium components yet with a 4-layer pcb, has the ultimate topology in signal path layout/grounding.

There is just no more ‘real estate’ left to develop. It truly is deserving of the iFi flagship mantle.