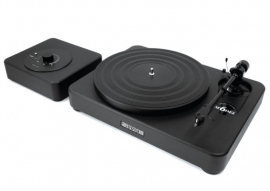 There are several ways to reduce the manufacturing cost of a record player, including dropping standards and making a similar but downgraded product at a reduced price. Alternatively, the approach that SME has chosen with the Model 6 is to start with a clean sheet but keep the engineering quality as high as ever. In fact, the company claims that the new Model 6 is built to exactly the same impressive engineering standards as any of its pricier decks.

This all-new deck still looks every inch an SME. It is sized to resemble the classic Model 20, but the design shows that the company isn’t afraid to move away from tradition. Until this point, all of its turntables have used thick slabs of heavily machined aluminium for their plinths. While this is a great solution that gives impressive rigidity, it’s also hugely expensive, so the engineers set about finding an alternative.

Their solution is a plinth made of a high-density resin material. This is CNC-machined and is claimed to have excellent rigidity and damping properties combined with high mass – just the attributes SME wanted.

Traditionally, the company’s decks have always used an elegant ‘O’ ring suspended sub-chassis arrangement to isolate the record-playing surface from environmental disturbances. That system isn’t viable at this lower price point, so the main bearing and arm assembly are protected from external energy by a vibration-absorbing silicone-based rubber compound from the aerospace industry. It is used both inside the plinth and on the chassis feet.

If our description of the plinth and isolating materials seem a little vague that’s because SME is pretty tight-lipped about the specifics. It doesn’t want to share the benefits of its research with rivals.
Speeds (rpm) 33.33, 45