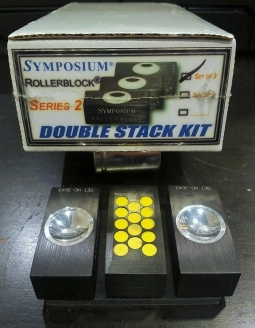 The conventional setup is to place the Rollerblock body on the support surface (which, again, must be non-resonant - glass, stone, plastic, etc. should not be used without a resonance mediating interface such as one of our platforms or, at minimum, a set of Point Pods). However, the "inverted configuration" offers enhanced performance by deployment of the Series 2 body placed upside down, with the ball bearing now on the bottom, and thus contacting the support surface. The improvements occur because the bottom matrix of the Series 2 body now directly contacts the chassis of the component, offering superior damping to the component and providing a better interface for high frequency energy drainage than only the tip of the ball itself. "Double Stacking" is the use of an additional set of Series 2 bodies placed on top of the balls, inverted, so as to form a "sandwich" of two bodies with a single ball in between. With rare exceptions, this is the highest performance setup configuration.