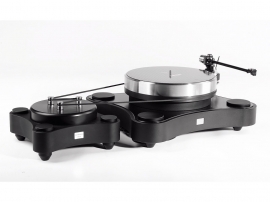 $ 295,000
Naturally, the experience gained over the last few years stood us in good stead for developing the Black Night, yet despite drawing on these experiences, the Black Night also incorporates many innovative features not seen before in this form. The Raven Black Night is a truly monumental turntable, as its sheer size and weight testify. Despite this, thanks to the proportions, colour and choice of materials, the design remains pleasing and harmonious.

In developing the Black Night, our aim was to build a turntable that could top even our own Raven AC in terms of subtlety, ease and silence. In this we have succeeded, and the results are seriously impressive. The Black Night portrays the music’s every detail with subtlety and stereo depth, whether it be human voice or instruments. Everywhere, you’ll discover nuances that had previously remained hidden. Attack and decay of transient notes are reproduced impressively. Thanks to the three-motor drive and the battery power supply, the Raven Black Night does its job with poise, serenity and composure, yet just like the other TW ACUSTIC turntables, it is highly dynamic, involving and rich in timbre.

The Raven Black Night is incredibly musical, its spatial presentation is so three-dimensional and tangible that the music is always reproduced with the utmost authenticity. As with the Raven AC, the Black Night also provides for the use of up to four tonearms. As an additional feature, we have developed an armboard that allows VTA to be safely and accurately adjusted during operation. This is achieved via a knurled thumbwheel, which allows adjustment to be precisely carried out without float.
Add to Cart 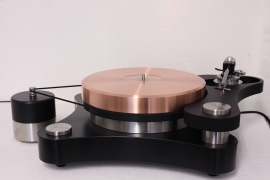 $ 168,000
For ten years now TW Acustic has been making a lasting impression on the turntable market. With our first model – the original Raven – perfect build quality became the standard. Not only that, back then we broke new ground and were the first manufacturer to use a custom-developed synthetic compound based on Delrin. Due to its perfect damping properties, it is almost impossible nowadays to think of a better choice of material than this for modern turntable construction. Also, the use of high-torque motors and sophisticated controllers allowed us to set a new benchmark. Thanks to our developments, music-lovers worldwide are able to indulge their audiophile passions with full satisfaction, and to enjoy their fascination with turntables on an impressive level.

To celebrate TW Acustic’s tenth birthday in March 2013 we present the "Raven AC Anniversary". The Anniversary represents a new statement in turntable manufacture. It is based on the Raven AC chassis, machined from our well-known proprietary custom compound with a screwed-in stainless-steel plate. The Anniversary’s platter is a composite construction consisting of 40mm thick copper fixed to a 20mm thick slice of our proprietary compound. Consequently, the platter is basically equal to that of the Black Night.

Our anniversary model has a very solid armboard machined from 30mm thick aluminium. We can provide the relevant adaptors for every tonearm. To achieve the correct mounting distance, the position of the adaptor for your particular tonearm can be adjusted steplessly in the slot in 1mm increments. To facilitate this we have etched a scale on the armboard showing 210–310mm. Should you wish to install more tonearms, extra swivel bases can be installed as before with the original Raven AC. From an acoustic point of view, the Anniversary offers the same advantages as the Raven AC, but thanks to the modifications keeps a firm eye on its bigger brother the Raven Black Night. Similar to the Black Night, the Anniversary lets the music flow, yet remains composed and pairs dynamics with incomparable transparency.

It is rare in this class to experience such resolution and dynamics in music. With the Raven AC Anniversary we bring you a big step closer to the ideal of real high fidelity musical reproduction.
Add to Cart

$ 99,000
We have taken the exceptional properties of copper, and in conjunction with our special polymer we have developed a compound platter. The musical reproduction benefits from breathtaking soundstaging and stereo depth, the representation of the instruments gains substance. The whole sound characteristic becomes clearer and more relaxed. Platter drive is via a maintenance-free belt.

The AC version of the Raven has a modified motor control. The armboard is made from bronze as standard. Feet: three, ceramic bead blasted and silk matt black anodised aluminium, designed and built by TW ACUSTIC featuring ball and spring suspension. A significant update is the provision of a new motor control unit. This is even better than its predecessor and is designed to provide support for the three-motor drive option.

We have taken the advantages of our unique drive system to the limit and have developed a three-motor drive for the Raven One and Raven AC. We have achieved perfect syncronicity between all three motors with our new, highly developed motor control system. The extremely precisely machined drive belt, coupled with finely toleranced and matched pulleys give the concept the optimal basis for the precision we demand.

If you were of the opinion that the Raven's drive system was unique, then of course you were right! But the new three-motor drive picks up where our unique single motor drive leaves off. The Raven or Raven AC is now available as a three-motor version. Of course, any existing Raven One or Raven AC can also be upgraded.
•Three-motor drive for Raven and Raven AC turntables
•Our three motors run absolutely syncronous thanks to a sophisticated motor control
•The diameters of the drive pulleys are accurate to within half a hundredth of a millimetre
•The drive belt thickness is ground to a tolerance of one hundredth of a millimetre

Our new armboards make changing to another tonearm on the Raven AC easier. Where before it was necessary to replace the armboard, now it is simply a matter of exchanging the adapter insert.
Add to Cart 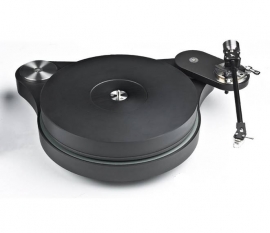 $ 63,000
The newly-developed Raven GT is not simply there to fill the gap between our base model the Raven One and the classic Raven AC. It incorporates knowledge and experience that we have made over the years. The primary aim was to be able to offer a compact turntable which could run two tonearms without any sonic compromise for a reasonable price.

The basic shape is similar to the Raven One. However, unlike the Raven One, the 22kg chassis of the GT is made from black anodised Aluminium, and due to sits shape is considerably more compact and takes up little more space than a 12" LP. The ability to attach two tonearms was the basis for the design. We have dispensed with the elaborate alteration involving a separate motor housing which was the case with the Raven One. The GT’s motor is located directly in the chassis, right behind the 6kg platter, so that the distance between the platter and motor pulley is kept to an absolute minimum. This allows the use of an extremely short belt which makes contact with almost the entire circumference of the platter. This allows us to attain wow and flutter values of 0.02%, almost unheard of with belt drive turntables and normally only associated with the very best of recent Japanese direct drive turntables.

We are certain that the new Raven GT will, due to its compact shape, reliability and flexibility with regard to tonearm choice, bring its future owners many years of musical pleasure of the highest order.
Add to Cart
Items 1 to 4 of 4 total