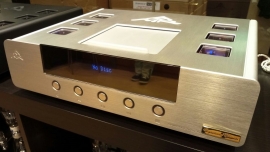 The CD-777 Compact Disk Processor upholds the AMR tradition of developing the most musically engaging components; by taking classic and modern audio approaches that are simple in concept, but challenging in execution. The CD-777 produces emotionally stirring music reminiscent of timeless, analogue replay. Exclusively using the Philips UDA1305AT Multibit chipset, a bespoke transport and premium quality valves, backed with cherry-picked components, the CD-777’s atypical approach surpasses digital source machines costing several times more. With the same OptiSample® technology as the CD-77, most important of all, Digital Master I and Digital Master II which were developed by AMR and are exclusive to the CD-77 and CD-777, means they are two of only a handful of digital components able to play "bit perfect" audio. This means music, not hifi is the result because there is no artificial manipulation of the signal (so often found in almost all other machines).
Mainstream components usually see functionality compromised. With the CD-777, rather, functionality has been taken to the extreme. The CD-777 is the first type of what AMR’s refers to as a “music hub”. Using the absolute highest quality design and execution, the CD-777 is first, a high-end CD processor. Second, able to receive a digital signal in from a PC or transport either through USB or S/P-DIF without the usual increase in jitter, it can be used as an accomplished DAC. Third, able to send out a digital signal through S/P-DIF to an external DAC or computer, it can function as an exceptionally well-designed transport source.

Able to play compact disks and computer audio to the highest level, without compromise and future-proofed for many years to come, the CD-777 can only be an AMR.
Add to Cart
Items 1 to 1 of 1 total