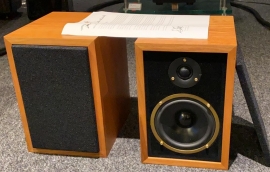 Ten years ago, we launched a new compact loudspeaker (1920) from our Whitehall Studio, London-which set out to provide superlative quality near-field monitoring performance. The little 1920 proved most popular, selling to a worldwide audience of
hi-fi buyers and music fans who’d been left underwhelmed by previous attempts from other manufacturers to produce a musically fluent small speaker. This British box won widespread critical acclaim worldwide, from professional audio & hi-fi magazine editors, writers and world leading musicians such as the ’Lloyd Webbers’!

Now the 10th Anniversary Limited Edition is here, a perfected version of the original with new found confidence and power to its performance. Only 192 pair are produced, sporting MAD’s later Nano Cellulose Composite Paper driver The new 1920 employs leading-edge technology to strengthen the fibres of the paper cone with minimal increase in the moving mass. There’s a metallic resin-coated chassis frame to enhance the rigidity of the drive unit’s mounting structure, and even the mounting bolts are now made from proprietary alloy with gold plate.

The cabinet structure employs new MAD Damping Resonance Control technology,
And the new neodymium tweeter runs smoothly up to and above 50kHz. The crossover has been redesigned and seaked with MAD’s proprietary anti-vibration technology, which is a highly elastic compound designed to turn mechanical vibrstion into heat. The new mini-monitor comes in a choice of hand picked Zebrano wood, Golden Cherry –oiled by British craftsmen and hand built in Britain with love.

Wish your new 1920 10th Anniversary Linmited Edition can bring you bring you yers of enjoyment, and become the blessing to your household, with good health, joy and
happiness. We are confident that youwill loved our new baby, please tell your friends how deep you lovedthem through social medias.

Look forward to see you at Britain’s first Haute Fidelity Hotel-The Music fable (another master piece by the MAD Designer Stage) in the near future, with warmest hospitality.